As I planned this winter Pennine Way trek from the comfort of my living room, I wondered what the biggest hazard I could encounter on the walk would be.   I concluded that it would probably be “deep snow”.   After all, I thought I could probably cope with pretty much anything else the Way might throw at me, except possibly cows.   (And as an interesting aside – while cows were the biggest hazard that I came across on the “LEJOG” hike in 2014. I haven’t seen a single one on the PW.   I actually think they may hibernate for the winter).

But “deep snow” had the benefit of being distinctly rhetorical.   Yes it was a hypothetical hazard, since we hadn’t seen snow in any quantity in England (Scotland probably a different matter) even up to the date I left.   So really I didn’t think it was a serious risk and I didn’t worry about it.

Well, over the last two days I’ve had the opportunity to consider what would happen if the “deep snow” scenario materialised.   Because I’ve had it in bucketloads. And extremely big buckets, too.

On the night before a “big” walk, I don’t tend to sleep very well, and today’s hike from Dufton to Alston, right across the spine of the very highest Pennines, was definitely a “big” walk.   There are three of these “big” walks on my route – the Penyghent section, which I completed with Mike a few days ago, the Cross Fell section, today, and then the Cheviot section next Thursday. Of all the three walks, the one where I really didn’t want heavy snow was today’s – since the track spends a good ten miles of its length at high (for the UK) altitude.

To make matters worse, after yesterday’s experience I wasn’t totally sure that if I encountered the same conditions again today, I would actually be able to make it to the end of the walk.   It was a good eight miles longer and, a bit alarmingly, from an examination of the map, I couldn’t see any easy escape route off it, short of retracing my steps and returning to Dufton.

After waking up every couple hours all night, and anxiously sticking my nose out of the window to see what the weather was doing, I eventually gave up on sleep and got up at about 6.

Over breakfast I started chatting to the three other guests in the B&B and was very glad to discover that they were also heading for Alston via the Pennine Way today, although were planning to complete it in nine hours versus my estimated eleven.   So I left as soon as I could, aiming to have the other walkers behind me at least until I reached the top of Cross Fell.   I wanted to feel that if anything untoward should happen to me, I would have the comfort of “sweepers” following me.

So I set off directly out of Dufton, climbing consistently up out of the Vale of Eden and into the high Pennines.   The temperature fell rapidly as I climbed and to my delight yesterday’s slush started to freeze hard, so the going became a bit easier as I climbed.

But the ascent of Knock Fell, the first of four summits on today’s Pennine ridge walk, was largely pathless and as I climbed, the snow cover became continuous and deep, and a heavy mist dropped over the landscape.   In this whiteout world, it became impossible to judge scale and direction.   Drifts which appeared inches high were waist-deep sinkholes, whereas other that appeared mountainous could be stepped over with ease.   I also found it hard to tell up from down, except by the wearying force of gravity on legs and soul.

The Cross Fell summit is completely featureless – at least it was today – and I relied almost totally on my GPS to get me to the top.   I say “almost” because I did have another navigation aid.   The wind had blown the ice into pointed drifts that faced into the air-flow.   These sastrugi (a Russian word) were ready-made direction indicators – with the wind coming from the north east, I found that if I kept my boots at 45 degrees to the sastrugi I would be heading roughly north – the direction I wanted to go.

It took me five hours of solid slog to get to the summit, with only the briefest of stops on Knock Fell to replenish energy levels with a synthetic dextrose and caffeine gel bar.   Pretty unpleasant but it put an instant and much needed zing in my step.

The three walkers caught up with me at Cross Fell summit, as I’d hoped they would.   We walked together to Greg’s Hut, a remote bothy just to the north of the summit, and had a brief break for lunch.   From there, it was a relatively straightforward slog down a track to the valley at Garrigill.   By the time I reached the welcome sanctuary of civilization, I was pretty tired but still had another five miles to go to Alston.   So I stopped briefly to eat my last sandwich, anxious to make the most of the twilight and reach Alston before nightfall.

The remaining miles disappeared relatively quickly, despite being an unwelcome trudge through mud and farmyards.   I made it to the B&B just after six, exactly ten hours after I set off – pleasingly, a full hour ahead of schedule.   So now I’m thinking about tomorrow’s walk.   It’s an eighteen mile ramble along the side of the South Tyne river to Hadrian’s wall.   Other walkers have told me it’s a “tedious” section and indeed I have no recollection at all of it from 1977, so it’s can’t have been very memorable.   But after the last couple of days I reckon I’ve had enough excitement to last me at least as far as the Cheviots, so tedious is fine by me.   Bring on the tedium! 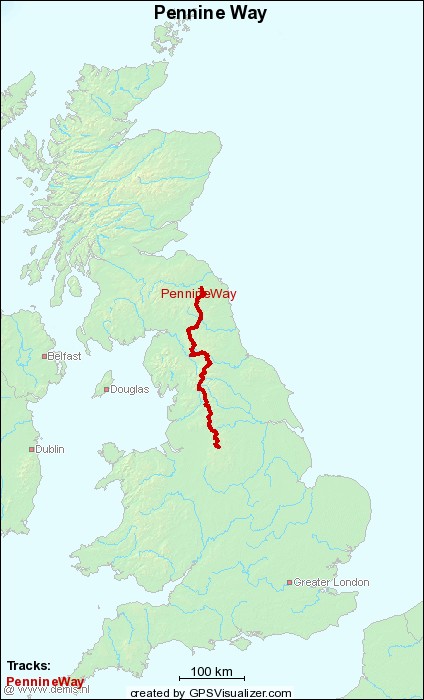